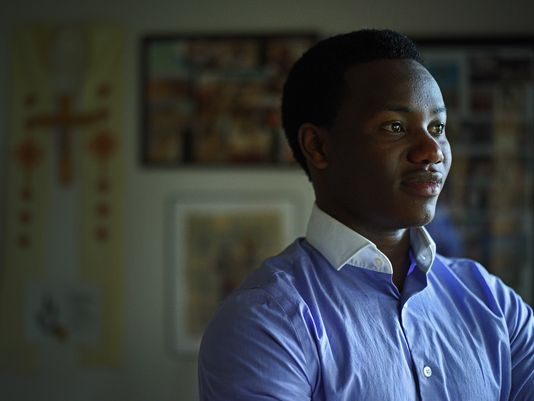 Wilson Kubwayo returned to Sioux Falls this summer because he wanted to be part of the community that changed his life.

During his time at Washington High School, a game-winning bicycle kick grabbed the attention of colleges looking to recruit an up and coming soccer star. But Kubwayo was only on the field because he had flipped his life around, shedding the burdens of anger and resentment. He carried both with him from his childhood in a Tanzanian refugee camp, or as Kubwayo calls it, “the place the world introduced me.”

“I was born in this small fish tank,” Kubwayo said “The lifestyle that was around me wasn’t allowing me to grow.”

Kubwayo realized his potential after he moved to Sioux Falls as a teenager, and now he wants to share his story with the city’s future high school graduates.

The Washington grad is returning to his alma mater Thursday to speak with a new class of freshmen. Next month, he and a friend are hosting an open mic night for young and aspiring poets, artists and musicians.

“He really wants to inspire youth, because he’s told me his background story,” said Suleyman Dibba, another Washington grad who is co-organizing the event. “He wishes there was someone or something there for him to turn to, to guide him in a more positive light.”

Wilson Kubwayo got the attention of soccer fans and coaches around the world with this bicycle kick.

Dibba and Kubwayo came up with the idea together and are looking for students from each local high school to get involved. The open mic is scheduled for 6 p.m. Oct. 21 at The Bakery, 910 N. Main Ave.

Kubwayo hopes it will influence other young people to stay close to home.

“They graduate and they don’t come back,” Kubwayo said.

The open mic is his way of getting local youths more involved. Kubwayo struggled with isolation when he first moved to Sioux Falls. Finding a way to move forward in school meant learning how to test his own limits, which eventually led to success in the classroom and a place on Washington’s soccer team.

Kubwayo graduated from a Minnesota college this spring with a degree in philosophy, but there was a time in his life when the idea of higher education was a wild dream.

His early childhood was filled with poverty and violence. Kubwayo was 2 years old when his parents fled their homeland of Burundi because of civil war.

Elie Nitunga and his wife sought refuge in Tanzania, but life there offered few opportunities.

“In the refugee camp you cannot get what you need,” Nitunga said.

Kubwayo went to grade school in the camp, where he was beaten by teachers for misbehaving.

He learned to hate school, and grew angry with the differences between his life and what he saw on TV. The anger stayed with him when his family moved to the U.S. Unable to afford a car, they walked. Unable to fit a family of nine under one roof, they lived split between two apartments.

“I wanted to dream bigger, but I couldn’t,” Kubwayo said.

He still remembers the day his family bought a home and was re-united. But perhaps more important to Kubwayo’s future was a personal revelation.

Kubwayo watched as other students were lauded for their academic successes during his school’s yearly honors festivals. He didn’t know who they were, but Kubwayo realized he wanted the same recognition.

It meant dropping his pre-conceived notions about the world, and the bitterness he felt about his childhood.

Kubwayo describes his hang-ups as a “mind viruses.”  They infected his way of thinking about the world. He beat them by refusing to let them dictate his decisions.

Now, Kubwayo hopes to make a difference for the next generation of youth who might feel defeated or detached from the community.

Book Wilson Kubwayo as a speaker, or learn more at https://wilsonkubwayo.com/